On September 22, 1950, Dean Littleford, Rector of Christ Church, Waukegan formed a committee to create a chapel to serve the growing west side of Waukegan. A two-acre site on Green Bay Road just north of Grand Avenue was purchased. The Rt. Rev. Wallace E. Conkling, the Bishop of Chicago, presided over the ground-breaking ceremony in the spring of 1951. The name chosen for the new mission was All Souls' Chapel and the first service was held on Ash Wednesday, February 26, 1952. The Rev. William Barks (1951-52) was appointed Vicar.

The earliest building was a one-story building with a large room to serve as the church and the fellowship hall. A succession of vicars, including The Rev. Vincent Butler (1953-54), The Rev. Joseph Mazza (1954-56), The Rev. David Bronson (1956-57) and The Rev. R. Dean Johnson (1957-63), built the membership steadily. Within a few years, a new room was added to house the church school. In 1962 the buildings were raised so that a full basement could be built to house a growing church school as well as a new kitchen.

In 1964 All Souls' changed its name to The Church of the Annunciation of Our Lady to reflect its strong Anglo-Catholic tradition. In 1976 the mission became self-supporting and achieved parochial status. The church was consecrated at that time. In 1976 a visit from The Most Rev. Michael Ramsey, the 100th Archbishop of Canterbury, and Lady Ramsey was a high point in the parish history. Lord Ramsey was the celebrant at the Eucharist during that visit. Clergy serving during this period included our vicar, The Rev. T. Timothy Tepsic (1963-65), The Rev. Edgar Wells (the last Vicar and first Rector, 1965-78) and Fr. William Lawson (second Rector, 1979-84).

From 1983 until 1988 the Hispanic congregation for the Waukegan area met at the Church. The Rev. Gustavo Hernandez was the Hispanic Missioner and Assistant to the Rector from April 1, 1984 till December, 1988

In the late 1980's a development company made an offer to purchase the parish property on Greenbay Road. A study of the offer and the future for the congregation culminated in a majority vote on the part of the congregation to sell the property and purchase a site about five miles west in the midst of a large amount of open country. The service counter of the Burger King restaurant just north of Grand Avenue at Greenbay road occupies almost the exact location of the altar of the former church.

On April 30, 1989, The Most Rev. Frank T. Griswold, III, at that time the bishop of Chicago, broke ground for the construction of the new church and associated buildings on the current site. During this time of change several supply clergy served our parish. The Rev. Richard Kearney (third Rector, 1985-89) served the congregation until just before Christmas, 1989.

The first Eucharist was celebrated in the new church on June 21, 1990. Already in place were a refurbished and enhanced pipe organ, moved from the old church, and stained glass by Chicago Artist Roger Hornsby. The glass features an Annunciation window plus windows depicting various appearances of Mary in Biblical stories, as well as an image of Mary as she is depicted in the Anglican Shrine of Our Lady of Walsingham in Norfolk, England. The new building was consecrated on May 9, 1991 by the Rt. Rev. Frank Griswold, The Rev. Edgar Wells preached. Since the move, our parish has been served by The Rev. Richard Wagner (fourth Rector, 1990-96), The Rev. William Broome, Jr. (fifth Rector 1998-99) and The Rev. C. Clyde Elledge (sixth Rector) and the Rev. Kathryn Elledge (2000-2011), The Rev. Elizabeth Molitors (sixth Rector 2013 - 2018), and The Rev Jenni Liem (2000-present). 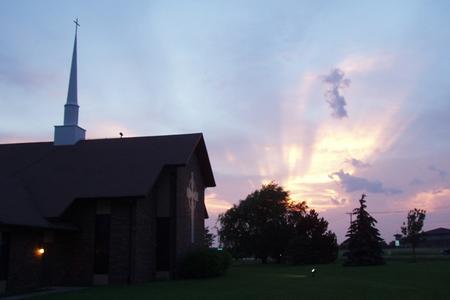